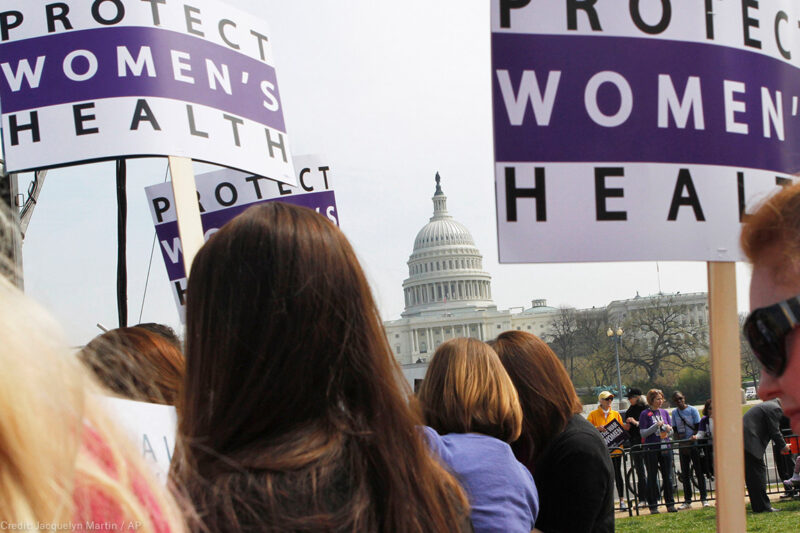 This week the House Appropriations Committee advanced the Labor, Health, and Human Services appropriations bill, the annual bill that funds federal health and education programs. It makes important strides forward on reproductive health and rights–and it also shines a light on the need for presidential leadership on abortion coverage.

The bill, under the leadership of subcommittee chair Rep. Rosa DeLauro (D-CT) and committee chair Rep. Nita Lowey (D-NY), blocks funding for implementation of the Trump administration’s discriminatory health care refusal rule, thanks to an amendment offered by Rep. Barbara Lee (D-CA). That sweeping new rule, issued late last week, aims to license discrimination in health care by enabling health care institutions and workers to refuse medical services on the basis of religious or other objections. If passed, this bill would stop that dangerous rule from moving forward.

The bill gives much-needed support to Title X, the nation’s federal family planning program that provides affordable birth control, cancer screenings, and STI testing and treatment to 4 million people annually. Title X is the primary source of preventive health care for many low income patients—and in the face of relentless attacks by the Trump administration, including the domestic gag rule recently blocked in court, it’s critical that this bill protects Title X. The bill also gives a needed boost to programs that provide medically accurate sexual health education, including the Teen Pregnancy Prevention Program, and efforts to fight maternal mortality.

But there is also a glaring problem: it leaves in place the Hyde Amendment, which for over 40 years has banned abortion coverage in Medicaid and other government health insurance programs in almost all circumstances. As a result of such coverage restrictions, in many parts of the country, the right to an abortion is a reality only for those privileged enough to afford out-of-pocket care. Poor women, most often poor women of color, are forced to forgo basic necessities in order to pay for the care they need, while 1 in 4 are denied care altogether.

To bring an end to this decades-long injustice, the ACLU calls for the removal of the Hyde amendment and all other abortion coverage restrictions from appropriations bills, as well as passage of the EACH Woman Act, which would eliminate these harmful riders once and for all while also ending political interference in the private insurance market. It’s time to end this discriminatory policy so that everyone can make their own decisions about abortion, regardless of what kind of insurance they have or how much money they make.

For this to succeed, however, it will require strong, decisive leadership from a president who supports abortion access for all. Even with a pro-choice majority in Congress, an anti-choice president can veto any bill that expands abortion coverage and bring progress to a halt.

That’s why ACLU volunteers around the country are asking presidential candidates, as part of the nonpartisan Rights for All initiative, whether they will take a stand and lead the fight to ensure that everyone can access abortion care. As a matter of institutional policy, the ACLU does not support or oppose individual candidates for elected office. But we do want to ensure voters are informed and to see leaders use their megaphones to elevate the most important civil liberties and civil rights issues of the day. That’s why these ordinary Americans are getting candidates on the record about ending abortion coverage restrictions at campaign stops around the country.

As President Trump doubles down on dangerous and inflammatory lies about abortion, when abortion access is under attack all over the country, with politicians in state legislatures passing new restrictions designed to make abortion impossible to access or to challenge Roe v. Wade directly, this fight could not be more urgent.

ACLU voters reject this agenda. They want to support a candidate who will stand up for the right to abortion and has a plan to ensure that access is a reality for everyone.