What to Know About the Leaked Supreme Court Abortion Draft Opinion, and What’s Next 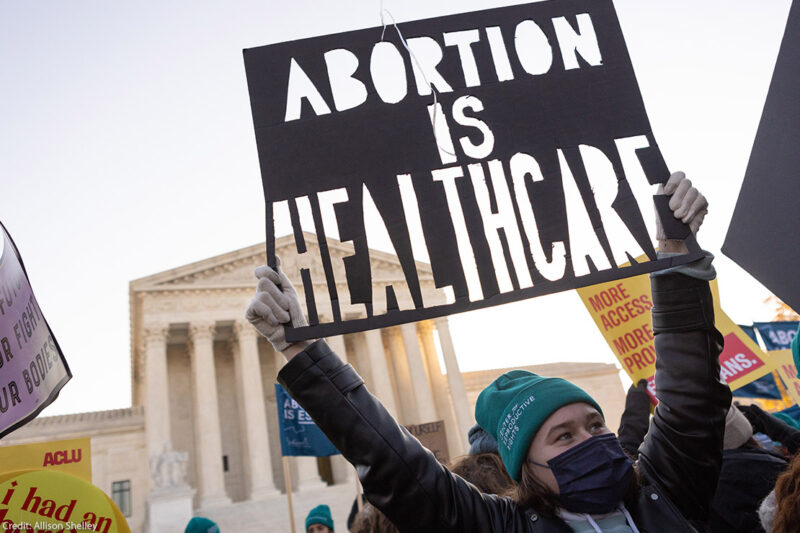 Brigitte Amiri, deputy director of the ACLU’s Reproductive Freedom Project, breaks down what you should keep in mind in the wake of the leaked draft.

Update: On June 24, 2022, the U.S. Supreme Court issued a shameful ruling overturning Roe v. Wade. Learn more about how the ACLU continues to fight for abortion access and what steps you can take here.

On Monday night, Politico published a leaked draft of the highly anticipated Supreme Court opinion in Dobbs v. Jackson Women’s Health Organization. The draft majority opinion, penned by Justice Samuel Alito, overturns the landmark Roe v. Wade decision, which has been on the books for nearly 50 years and has ensured abortion is a protected federal constitutional right. If this draft decision is issued as the official decision, it would be unprecedented and would take away a fundamental right for millions of people, and the language used calls into question far more than abortion access. For now, this is just a draft opinion, and the actual Supreme Court decision is expected by the end of June.

Brigitte Amiri, deputy director of the ACLU Reproductive Freedom Project, joined us on At Liberty to break down the nuts and bolts of this opinion and what lies ahead. This is a condensed version of that conversation, and you can listen to the full version here.

Special Edition: Strategies for the End of Roe

On Monday night, the news publication Politico leaked a draft of a majority Supreme Court opinion written by Justice Alito. The draft details the h...

ACLU: This draft opinion sent shockwaves throughout the country. Can you bring us up to speed on what our readers should know about the leak? How did you react when you first read it?

Brigitte Amiri: The draft opinion essentially says that the Constitution no longer protects abortion, and if it is adopted as the official court opinion, the consequences will be devastating. If this opinion is issued by the court, abortion will be banned in about half the states. When it first hit the airwaves, I was in disbelief, and I was skeptical of whether it was authentic or not. But we have been preparing for the possibility that the Supreme Court could overturn Roe just based on the questions that the justices asked in this case during oral arguments. So in that sense, it’s not a total shock that this is possibly where the court is going.

ACLU: Before we get into the details about the opinion, let’s reiterate that this is just a draft. How can people support folks who need access to abortion care now?

BA: Yes, it’s just a draft; this isn’t an opinion. People who have abortion appointments scheduled today should go to their appointments and call your local clinic if you have questions. This doesn’t change the law now. If you want to express your support, I would say tap into your local reproductive rights, justice, and health community and find out how you can be involved. Donate to your local abortion fund, and to practical support organizations that make sure people can access care. These are all critically important parts of the infrastructure that exist to make sure people can get care, and that infrastructure needs to be invested in. You can also contact your local representatives, and your senators. This is the time to let elected officials know where you stand on this issue and how important it is to you.

ACLU: Back to the draft opinion: Let’s recap ​​Dobbs. Where did the case originate, and what did the oral arguments in December hint about what was to come?

BA: This case was brought by our friends at the Center for Reproductive Rights — they represent the last abortion clinic in Mississippi. The case centered around whether the state can ban abortion after the first 15 weeks of pregnancy. The State of Mississippi asked the court not just to uphold the 15-week ban, but to consider the constitutionality of abortion in general, and whether the Constitution protects abortion at all. That was a direct invitation from the state to overturn Roe and Planned Parenthood v. Casey.

The Supreme Court’s choice to even consider this very broad question that has been settled for decades was really disconcerting.

ACLU: If the draft opinion is adopted by the court, what happens next?

BA: Roughly half of the states will ban abortion almost immediately, and half the states will continue to allow abortion. But it’s important to understand that the long-term agenda of abortion opponents doesn’t end with overturning Roe. What they want is a nationwide ban on abortion. So if you’re in a state like New York or California, where you believe you will have access to abortion even if Roe is overturned, that is true in the short term. But the plan from abortion opponents is to continue to push for a nationwide ban, so that could change.

ACLU: What is the ACLU doing, and what will we do if Roe is indeed overturned?

BA: On the litigation side, we’ve been holding the line in the states where we can by bringing defensive cases. But the federal courts are becoming more and more hostile, and if we lose the federal constitutional right to abortion entirely, these courts will not be the avenue to protect abortion. But we’re also working at the policy level in the states, where legislation is moving to protect access in states that don’t have abortion restrictions, so that people who travel to those states are able to get care quickly, easily, without hurdles and without obstacles. We’re also working on telehealth, and removing restrictions on access to medication abortion. We’re looking to state constitutions, some of which provide greater protection for abortion access than the federal Constitution.

ACLU: In Alito’s draft opinion, he writes that Roe was wrong from the start, saying that it has nothing to do with the original intent of the Constitution. Aren’t there many other examples of landmark decisions from the Supreme Court that don’t arise from the original context within which the Constitution was written? What else will be impacted if we go down this path?

BA: If this is really where the Supreme Court is headed — that you only have a constitutional right if it was contemplated by white men in the 1700s — then there’s a whole host of issues that we work on here and that people care about in our country that are at risk, like access to contraception and LGBTQ rights. These are rights that will most directly impact women, people of color, and the LGBTQ community. And we’ve already seen legislators talking about how Griswold v. Connecticut should be overturned — that’s the case that provides constitutional protection for the right to access contraception. Arguments about privacy in Griswold paved the way for same-sex marriage.These cases are interconnected, so all of these rights are implicated.

ACLU: Justice Alito also refers to a 13th Century treatise that designates abortion as homicide, and relies on medieval common law in which women are likened to chattel. Although some of this language may be softened before the final opinion does come out, it is hard not to see this as a window into the logic of a sitting justice that has a lot of power and is in the majority. How do we move forward while knowing that these are the perspectives of an institution that deems itself nonpolitical?

BA: Right, so we know these are Justice Alito’s views, and maybe this is ultimately written as a concurrence, rather than the majority opinion. But it is really terrifying that someone who is so powerful holds these views about people’s roles in society and women’s roles in society. So, how do we move forward? It’s not going to be the courts that are going to make the change. We’ve been able to stop a lot of really bad things from happening through our litigation. But in order to create long-standing, really fundamental change, it’s going to look different. We need to be looking to people who are organizing within the ACLU, our affiliates, and their coalitions on the ground, and looking to the local reproductive justice and health organizations that are already doing this work. Roe didn’t mean that all people had abortion access, and there were already people living in parts of the country without it. So as devastating as this moment is, we need to take it and really think about our vision. What do we want? Not just access to abortion and contraception for all, but also the ability to have children and to parent in the way that people see fit in a world free from police violence, and with infrastructure in our communities to care for those children. This is something that we all should be thinking about, and we really are not looking to the courts to make that change. We have to look within our communities and think about the long-term sustainability of reproductive freedom in this country.

ACLU: What can people do now to support your work, the work of your colleagues, and abortion access more broadly?

BA: We have actions on our website that people can take on all of these issues. Check out your local ACLU, and check out your local reproductive rights and justice organizations to see how you can get involved, how you can support abortion funds, how you can volunteer at the local clinic. What’s also incredibly important right now are voting rights. The vast majority of people in this country support access to abortion. But because of the diminished power in people’s votes through gerrymandering and other voting restrictions, the scaling back of the Voting Rights Act, the work that our colleagues are doing in the voting rights arena is also critically important. The right to vote has been so watered down because of all of the restrictions that have been put in place, and that we’re fighting against as well. So all of these issues that we work on at the ACLU are very connected. For any piece of this that people are interested in, there’s a way to get involved.