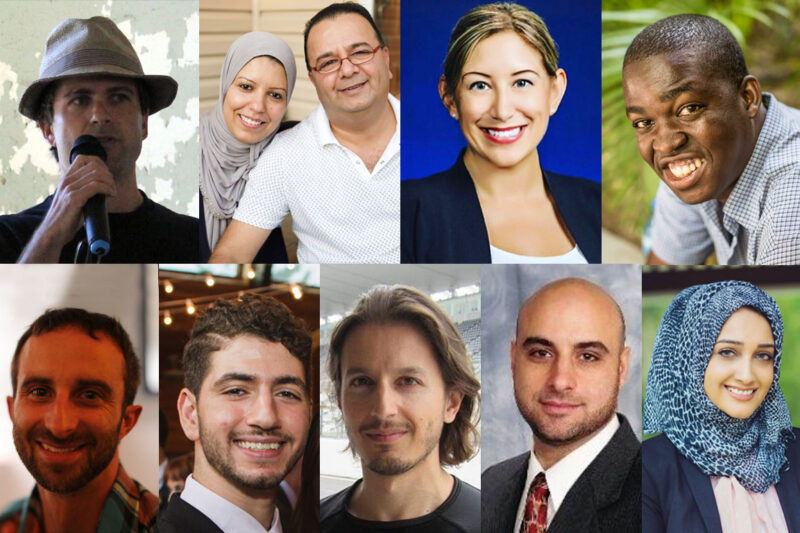 Warrantless searches of smartphones, laptops, and other electronic devices at the border are a major threat to privacy and civil liberties. Today, the ACLU, along with the Electronic Frontier Foundation and the ACLU of Massachusetts, filed a lawsuit challenging such searches as unconstitutional. The border should not serve as a dragnet for law enforcement to pry into our personal and professional lives.

We represent 10 U.S. citizens and one green card holder from a variety of backgrounds: a military veteran, journalists, students, an artist, an engineer, a limousine driver, and a business owner. All of them had their rights violated when border officials searched their smartphones or other electronic devices when they were returning from travel abroad. Officials also confiscated and held several of our clients’ devices for weeks or months.

None of our clients have been accused of any wrongdoing, nor have they been given any valid explanation for why this happened to them.

Learn more about the plaintiffs in Alasaad v. Duke

The government says it can search our devices for no reason at all, without a warrant or any suspicion whatsoever that a person has violated immigration or customs laws. Under separate policies that date from 2009 — when the smartphone era was still in its infancy — officers with U.S. Customs and Border Protection or U.S. Immigration and Customs Enforcement can probe the contents of your smartphone for hours while you wait. They also have the option of downloading and saving all of the data on your phone for later review. They can even confiscate your phone for a thorough “forensic” search at another location, only to return it to you weeks or months later, as happened to our client Matt Wright. One of our clients, Suhaib Allababidi, still hasn’t received his smartphone from CBP after seven months.

The frequency of device searches at the border has spiked recently. According to CBP data, the number of searches grew from 8,503 in fiscal year 2015 to 19,033 in 2016 — an increase of almost 125 percent. And officers have already carried out nearly 15,000 searches in the first half of fiscal year 2017, putting CBP on pace to conduct about 30,000 searches for the year.

It should go without saying that searches of smartphones, tablets, and laptops can be incredibly intrusive. Our phones have become blueprints for our entire lives. They contain massive amounts of sensitive and personal information, including much of our written communications, contact lists, location data, and photos and videos portraying the most intimate aspects of our relationships. For most of us, a search of our phones would be far more revealing than a thorough search of our homes. With access to all that data, the government could assemble a tableau of our lives so detailed and comprehensive as to leave very little private.

Many travelers also have especially sensitive content on their phones, such as medical information or privileged attorney-client communications. Two of our clients, Jeremy Dupin and Isma’il Kushkush, are journalists whose phones contained confidential source information. Sidd Bikkannavar carried a phone that was the property of his employer, NASA’s Jet Propulsion Laboratory. Nadia Alasaad and Zainab Merchant, both of whom wear headscarves in public in accordance with their religious beliefs, had photos on their phones that showed them without their headscarves — photos that they felt very strongly should not be viewed by CBP officers.

In carrying out device searches, border officials take advantage of the fact that travelers have no meaningful way to resist or contest the searches. If travelers decline to disclose the passwords to their devices, officers threaten to detain the travelers for longer periods or confiscate the devices.

When an officer directed Ghassan and Nadia Alasaad to reveal the password to Nadia’s phone, they had already been detained for five hours and were desperate to attend to their daughter, who was ill and whose condition was worsening while they waited in the border station. When Akram Shibly refused to turn over his phone, which CBP officers had searched during another border crossing only days earlier, officers responded with physical force. One officer grabbed Akram’s neck and began to choke him, while another held his arms and legs. A third officer then reached into his pocket and took the phone.

The personal toll that these searches can exact is profound. Diane Maye, an Air Force veteran and professor of homeland security and global conflict studies, describes feeling humiliated and violated as CBP officers searched her phone while she waited in an interrogation room, wondering if they were looking at her personal texts and photos.

This kind of arbitrary intrusion into people’s lives isn’t just outrageous, unnecessary, illogical, and wasteful. It’s also unconstitutional, in violation of both the First and Fourth Amendments.

The Fourth Amendment protects us against unreasonable searches and seizures — including at the border. To be sure, border officers can stop travelers and search their belongings even if they don’t suspect the travelers of wrongdoing, but mobile electronic devices differ fundamentally from luggage. The Supreme Court recognized as much in a 2014 case involving police searches of the smartphones of people under arrest. Noting the amount and variety of data accessible on such devices, the court had a simple answer for what police must do before searching phones after an arrest: “get a warrant.”

We’ve long argued that the same logic applies to device searches at the border. If officers have good reason to believe that a device contains contraband or evidence of a crime, they can ask a judge to issue a warrant based on probable cause.

Strong protections are also crucial to avoid chilling the exercise of First Amendment rights. If people crossing back into the country know government agents can search through their phone on a whim and see their communications and associates, they will think twice about what they say and write.

A warrant requirement is also necessary to promote fairness. It’s clear that members of Muslim, Arab, Middle Eastern, and South Asian communities have been disproportionately targeted for abusive questioning, searches, and detention at the border. Requiring a warrant for device searches would help prevent racial and religious profiling by promoting transparency about whose devices the government is searching and why.

We do not forfeit our constitutional rights when we return to the United States from abroad. If government agents want to search a person’s electronic devices, they can ask a judge for a warrant. This is what the Constitution demands. Our clients understand this. They’re standing up for all of us, and we’re standing with them.