Ballot High Across the Country

By Sondra Goldschein, Director of Program and Strategy, Affiliate Support and Nationwide Initiatives

I am on a ballot initiative-induced high and it’s not just because marijuana legalization measures passed in Colorado and Washington. I’m giddy because last night, in ballot initiative contests across the country, we heard directly from voters about our civil liberties. They spoke loud and clear. They want them protected, defended and expanded.

All across the country, we celebrated. On so many different issues, we were victorious.

There were disappointments, too. In California, a measure to replace the death penalty with life without parole was defeated in a close vote.  Voters passed anti-abortion and anti-immigrant measures in Montana. Oklahomans eliminated an important strategy for ensuring opportunity and diversity in America by prohibiting the use of affirmative action. Voters in Oregon did not pass a law to legalize marijuana. But overall, we have many more civil liberties victories than losses to celebrate this election year. This will be a year to remember.

You may think that’s it until the next Election Day, but not so fast. State legislators across the country will debate many of these same issues – like immigration, abortion, marriage, and criminal justice reform – next year during the state legislative sessions.

And when they do, make sure that you keep up with what’s happening. Let your representatives know what you value in your community, and hold them accountable for their votes. The more we get involved in our legislative process, the more we’ll have to celebrate in the years to come. Election Day is only the beginning. 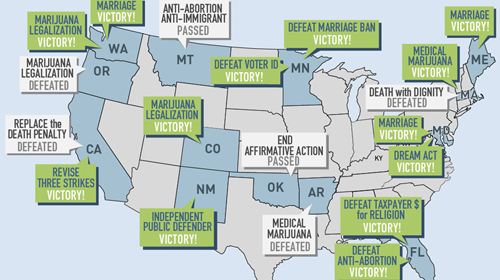 That's really funny b/c someone I worked with last year said that her "whole world had turned black" when she woke up on Wednesday and saw that her beloved man of the 47 percent remark DIDN'T win the election.
I was so disgusted to hear it I thought I might actually get physically sick.
I can understand when REGUlar people decide they want a bigoted fool to be president.
I CAN'T comprehend why people who work in health care - and claim to care so much about human beings - would think the same way.