Instead of Ending the Shutdown, Senators Plan to Encourage Punishment of Israel Boycotts

In the middle of a government shutdown, the Senate leadership’s first order of business in the 116th Congress is not legislation to reopen the government.

Instead, and incredibly, the Senate is again trying to slip a measure intended to suppress protected political expression past public scrutiny. The bill is the “Combatting BDS Act,” which would express federal approval of state laws that place restrictions on boycotts of Israel and its settlements, as part of an effort to weaken the Boycott, Divestment, and Sanctions (BDS) movement against Israel. The bill is included in S.1, which the Senate plans to vote on this week. On Monday, the ACLU sent a letter to senators expressing opposition to the bill.

To their credit, Sens. Ben Cardin (D-Md.), Chris Van Hollen (D-Md.), and Bernie Sanders (D-Vt.) have urged the Senate not to consider any bills, other than those that would reopen the government, until the shutdown ends. We agree. The Combatting BDS Act represents yet another covert attempt by the Senate to enact legislation that would burden fundamental free expression rights without proper consideration on the heels of a failed attempt last month to pass a different law criminalizing boycotts of Israel. But moreover, voting on it now, amid a partial government shutdown, would be, as Sen. Cardin noted, “a fundamental failure to govern.”

The Combating BDS Act would attempt to give legal cover to states that enact laws penalizing businesses and individuals who participate in boycott activities against Israel and Israeli-controlled territories. These state laws, dozens of which exist in many different forms, generally compel state contractors and any entity in which the state invests — for example, through a state-run pension, retirement, or endowment fund — to sign oaths promising not to boycott Israel as a requirement of maintaining their relationship with the state. However, as courts found in the McCarthy era, the government can’t fire its employees or contractors just because they refuse to sign an oath promising not to engage in disfavored expression or association. And two federal courts have already held state requirements to swear not to participate in boycotts of Israel be unconstitutional.

While we take no position on Israel boycotts, the BDS movement or the Israeli-Palestinian conflict, we do maintain that states should not be sanctioning businesses on the basis of First Amendment-protected expression and association. We have consistently — and successfully — argued this position in situations where government entities have threatened to boycott a company based upon its constitutionally protected speech and associational choices. This is especially true where the ideological position has no connection whatsoever with the business relationship at stake. Math teachers in Kansas and newspapers in Arkansas should not have to disavow participation in protected expression and association in order to do their jobs or engage in business relationships with the state. With the Combatting BDS Act, Congress would be approving state laws imposing such unconstitutional requirements.

On Monday, Sen. Marc Rubio (R-Fla.), the lead sponsor of the bill, tweeted: 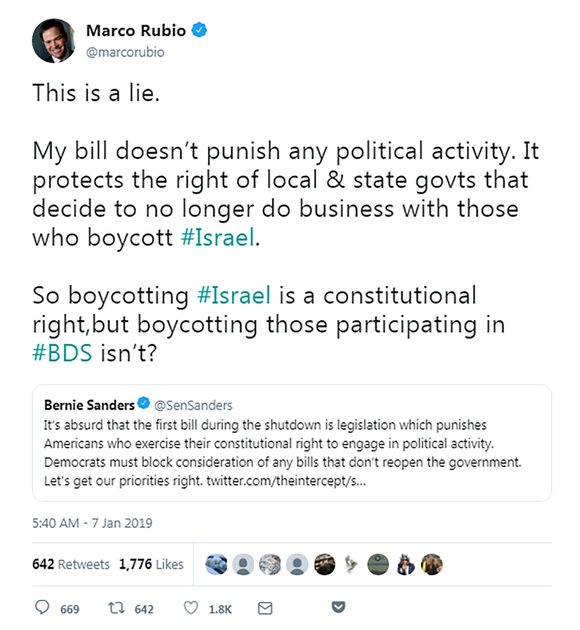 However, as we responded, the government, under the Constitution, does not have the right to punish people for their views. The First Amendment protects the people, not the government.

Even setting aside our fundamental disagreement about the wisdom of the Combatting BDS Act, it is abundantly clear that the Senate should not be considering this legislation, or any other legislation, until it fulfills its first duty: maintaining a functioning government. The Senate should vote first to open the government and alleviate the pain of this interminable shutdown that disrupts people’s lives and livelihoods every second that it continues.