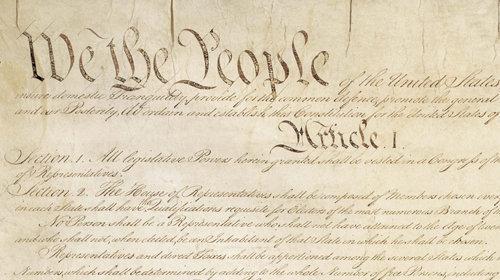 At a time when the anger abroad over the Innocence of Muslims video shows no signs of abating, President Obama gave an impassioned speech Tuesday at the United Nations that was a full-throated, unqualified defense of the American tradition of free expression.

We [protect speech critical of religion not] because we support hateful speech, but because our founders understood that without such protections, the capacity of each individual to express their own views and practice their own faith may be threatened. We do so because in a diverse society, efforts to restrict speech can quickly become a tool to silence critics and oppress minorities. We do so because given the power of faith in our lives, and the passion that religious differences can inflame, the strongest weapon against hateful speech is not repression; it is more speech.

Damn straight. That’s not in any way equivocal. Although the president did call the video “crude and disgusting,” that is irrelevant to the question of its constitutional status.

Unfortunately, many disagree with the president. Some in Congress, the media and academia have suggested that the religious violence overseas somehow justifies what I’m going to call a “foreign policy exception” to the First Amendment. Democratic Senators John D. Rockefeller (W.Va.) and John Kerry (Mass.) have both stated that YouTube should remove the video from its site. University of Chicago Law Professor Eric Posner argued this week in Slate that the United States “overvalues” free speech. Sarah Chayes—a former NPR reporter who now lives in Afghanistan—wrote in the Los Angeles Times that the violence sparked by the Innocence video may justify its censorship.

Most of these arguments boil down to something along the lines of: the video is sufficiently inflammatory that it qualifies as “incitement,” which is one of the narrow categories of expression (like fraud) that do not technically receive First Amendment protection. These narrow categories of speech can be restricted by the government without it jumping through too many hoops

In truth, that’s not a crazy argument. It is wrong, though. Here’s why.

The example that keeps coming up is the famous “falsely shouting fire in a crowded theater” line from a World War I Supreme Court case called Schenck. There, Justice Oliver Wendell Holmes upheld a conviction under the 1917 Espionage Act (the actual passage is “[t]he most stringent protection of free speech would not protect a man in falsely shouting fire in a crowded theatre and causing a panic”).

It’s crucial to note exactly what was being prosecuted in Schenck. The defendant—a member of the Socialist Party—was being prosecuted for a pamphlet urging opposition to the draft. It did not call for violence. It did not even call for civil disobedience. Nevertheless, despite the offense being nothing like shouting fire in a crowded theater, Holmes used the analogy to justify this now roundly derided decision. The “crowded theater” example is worse than useless in defining the boundaries of constitutional speech. When used metaphorically, it can be deployed against any unpopular speech.

Schenck isn’t the law anymore, for precisely that reason. If you really want to talk incitement, look at Brandenburg, the case from the late ‘60s that currently governs. There, a Ku Klux Klan leader was convicted in state court for incitement after giving a speech at a cross-burning rally. The defendant made reference to “revengeance” (sic) against the federal government for “suppressing the white . . . race,” and called for a July 4 march on Washington. The Supreme Court reversed his conviction and effectively repudiated Schenck. The court held that, to be unprotected “incitement,” speech must meet three requirements. The speaker must intend to cause violence. The violence must be the likely result of the speech. And the violence must be imminent.

As applied to the Innocence of Muslims video, an incitement argument is a tall order. First, there was a significant delay between release of the video and the riots overseas. Many would argue the YouTube release isn’t where you start the “imminence” clock; the key is how long it takes between when the video goes viral and the ensuing violence. But that would completely eviscerate the imminence requirement. Otherwise, I could go back, find a speech from a dozen years ago, use it to whip up a mob, and thus render the speech unprotected under the First Amendment.

Second, there’s just a basic “causation” problem here. The Brandenburg concept of incitement actually goes back all the way to John Stuart Mill, who argued it’s perfectly acceptable to say in print that corn dealers starve the poor, but not to say it in front of an angry mob gathered, pitchfork-ready, outside the house of the corn dealer. Although the former may rouse the passions of the rabble if handed out by a rabble-rouser, it cannot be the direct cause of harm to the corn dealer. Accordingly, posting the video on YouTube (and even sending it to folks who would distribute it to a mob) isn’t the same as using it to whip up the pitchfork-wielding mob into violence. Rather, as soon as you need an intermediary to help get the violence going, even if using the inflammatory speech as the “spark,” the intermediary becomes the individual guilty of incitement—not the initial speaker.

But that’s all well-trod ground. Posner raises a more fundamental question. In justifying restrictions on the Innocence video, he says, “[t]his is a video that, by the admission of all sides, has no value whatsoever.” Well, no. I’m not sure all sides concede that. It’s virtually incomprehensible, but it does criticize a major religion, which is a classic exercise of the First Amendment. Even if it is valueless, the danger the First Amendment is meant to address is that when the government becomes the arbiter of the value of speech, it will use that power to its own parochial benefit.

In any event, say what you will about the Innocence video—and folks should say lots—but it is clearly constitutionally protected speech. President Obama took a firm stand on the right side of the First Amendment this week, and may have reminded many overseas that American-style freedom of speech isn’t their enemy, and may even be their friend. He deserves much credit for this.