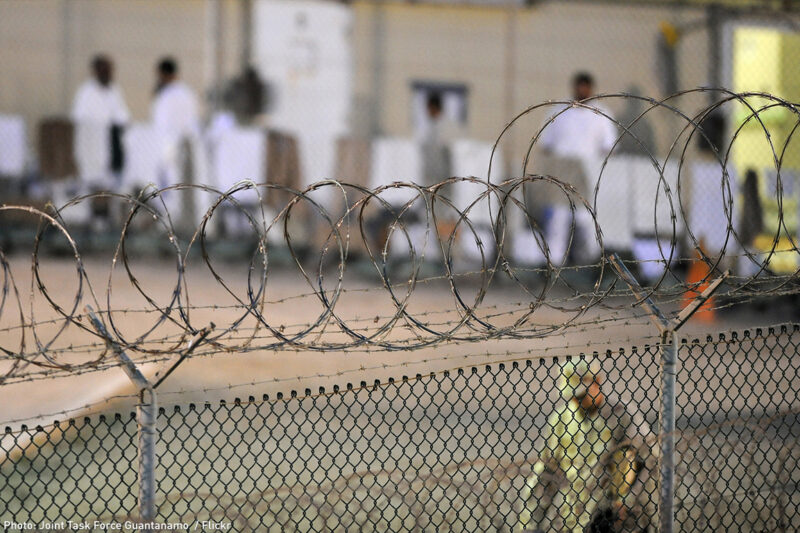 Observers walking into the viewing gallery of the Guantánamo Bay military court are met with a number of signs depicting prohibited behavior. One of them cautions against any manner of “visual enhancement devices” and features a calm, smiling woman undisturbed by the constitutional and human rights violations transpiring a few feet away. This mundane image serves as a symbol for what we as a society must avoid: normalizing the due process violations and excessive secrecy that have marred the military commissions since their inception.

This reminder is particularly pressing given President Trump’s campaign promise to “load [Guantánamo] up,” and Attorney General Jeff Sessions’ comment that Guantánamo is “a very fine place” to send terrorism suspects. Sending more prisoners to Guantánamo for detention or military trial would reverse the trend set by Trump’s predecessors. Former presidents Bush and Obama transferred 532 and 198 detainees, respectively. Forty-one are still held on the base. No new prisoner has been slated for military prosecution since 2013.

Yet denial of due process remains in full force. Of the detainees left in captivity, only 10 have been charged with a crime. The rest linger in the limbo of indefinite detention. For those who have been charged, the stacked deck of the proceedings creates a set of fundamental fairness violations unique to the military commissions.

For instance, classification rules can prevent defendants, and sometimes even their attorneys, from viewing the very evidence the prosecution holds against them. The commission’s evidentiary standards also offer less protection than federal courts, such as relaxed restrictions on the admission of hearsay evidence. The jettisoning of traditional safeguards has particularly troubling implications for the commission’s capital cases because, as federal constitutional law has long recognized, when death is on the table, extraordinary measures must be taken to protect against error.

In an example of the protections at stake, this week’s pre-trial hearings for the five defendants accused of planning the September 11, 2001, attacks included arguments on a principle central to fair and effective representation: the attorney-client privilege.

Air Force Capt. Brian Brady, counsel for defendant Walid bin Attash, began with a motion seeking information on intelligence agencies’ surveillance of the defense team. The defense described a long-running pattern of infringement on the attorney-client privilege in these proceedings, including the presence of surveillance devices disguised as smoke detectors in attorney-client meeting rooms, and the infiltration by the FBI into defense teams.

As James Harrington, the lead attorney for defendant Ramzi bin al Shibh, reminded the judge, these allegations are not mere speculation: He uncovered an FBI informant, within his team, who passed privileged attorney-client communications to the agency. In a similar vein, another attorney for defendant bin Attash, Cheryl Bormann, argued a motion related to their detection of an unknown individual who was not on the defense team but had access to client files housed on a supposedly secure shared network drive.

These violations would not be tolerated in federal criminal trials. The privilege recognized between client and attorney, and the trust it creates, is the fulcrum on which effective representation rests. When it is violated, the attorney-client relationship suffers, and the exchange of information and ability to provide adequate representation are impeded. In a capital case, the trust between client and attorney is even more crucial, given the need for the attorney to investigate and compile what’s known as “mitigation” evidence, reflective of the client as a whole person.

As Brady, counsel for defendant bin Attash rightly noted, part of the attorney-client relationship consists of building a foundation of trust so that a client will divulge the “most private, most secret, and most terrifying moments of their life.” Building trust with a client is challenging enough without that client believing it is possible that U.S. government intelligence agencies are monitoring communications to his attorney. As attorneys at the ACLU’s Capital Punishment Project and John Adams Project know firsthand, the crafting of a complete and compelling mitigation narrative hinges on a client’s faith in his attorney.

This week’s hearings reiterate the danger of allowing the deeply flawed military commissions — and Guantánamo itself — to become acceptable in the national consciousness. Future generations will not judge these proceedings on our best intentions or aspirations. They will instead consider the concrete measures we took to ensure that principles of fairness and justice were preserved.

As President Obama explained just last year: “If we don’t do what’s required now, I think future generations are going to look back and ask why we failed to act when the right course, the right side of history, and of justice, and our best American traditions was clear.”