At Guantanamo, Sometimes Even the Judge Is In the Dark 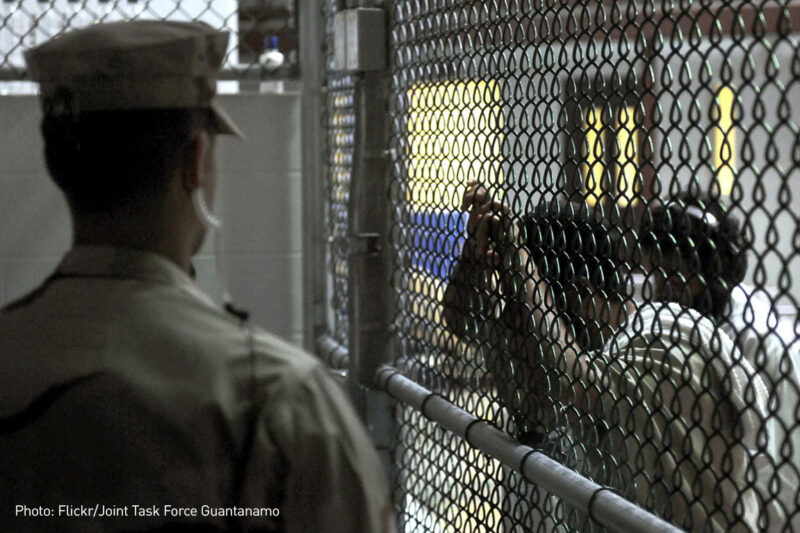 I’m writing from Guantánamo Bay, where pre-trial proceedings in the military commissions prosecution of the 9/11 defendants have restarted after an 18-month delay. It has been a faltering start, to say the least: Within ten minutes of the first hearing, the agenda was derailed. Again.

One of the defendants, Walid Bin Attash, asked about the procedures that would allow him to represent himself because he could not trust the independence of the military commission, including his lawyers. All the parties then had to grapple with how self-representation would work in this novel context. But lurking behind these dilemmas is the real issue that has so often derailed the military commissions: the government’s use of secrecy in what it presents as a public death penalty trial.

As we have pointed out for years, the military commissions are unfair, unconstitutional, and plagued by excessive secrecy. These challenges make it extraordinarily difficult for the defense attorneys to do their job. And they make it even harder for defendants to exercise the right to represent themselves meaningfully.

There are straightforward logistical impossibilities for defendants if they attempt to represent themselves. They are held virtually incommunicado in “Camp 7” at Guantánamo, a secret prison within a secretive prison holding detainees who were tortured at the CIA’s secret black sites. Defendants cannot file motions, consult a law library, communicate with (or even learn the names of) witnesses, or compile confidential legal documents.

The defendants also face the unique challenge of representing themselves when they have been tortured by the government that seeks to kill them, continue to be subjected to a “controlled chaos strategy of changing the rules all the time” that serves to retraumatize them, and are denied rehabilitation to help them cope with the effects of their torture. Conditions at Camp 7 reportedly exacerbate the continued effects of CIA torture. Bin Attash declared at the beginning of this week’s hearings that “we are still in the black sites” before the judge, Army Col. James Pohl, cut him off.

The results of torture are quite visible at the trial: As an observer, one of the most difficult aspects of these hearings is watching the guards place a particularly frail defendant, Mustafa al-Hawsawi, each morning on a chair equipped with a special pillow. As the Senate Intelligence Committee’s torture report documents, al-Hawsawi was subjected to “rectal exams conducted with ‘excessive force’” while detained at a secret CIA prison. CIA records indicate that the result was “chronic hemorrhoids, an anal fissure, and symptomatic rectal prolapse.” He now weighs less than 100 pounds and sometimes bleeds on his clothing. His medical records, like so much else at Guantánamo, are kept secret even from his counsel.

But perhaps the single biggest obstacle to self-representation is government secrecy. Defendants in the military commissions are not permitted to see classified evidence. That’s the case even if the government tries to use it to put them to death, and even if it could help their case. How can someone defend themselves when they can’t see the evidence? This problem isn’t confined to the self-representation context; even security-cleared defense counsel at Guantánamo are sometimes kept in the dark about relevant evidence.

These difficulties could be left for another day, suggested the judge. Perhaps, if a defendant chooses to represent himself, the military commissions could muddle through whatever problems cropped up along the way. Maybe the most obviously unfair scenarios would never come to pass, he hypothesized. At that point, former Secretary of Defense Rumsfeld entered the frame: Are concerns about the viability of self-representation in the military commissions merely a case of “unknown unknowns”?

So many questions arise when you try to invent justice as you go along.

So many questions arise when you try to invent justice as you go along.

The government has chosen to sidestep our tried and true federal courts and created a novel death penalty court here at Guantánamo. Without a doubt, there are a great number of unknown unknowns in this unprecedented proceeding. But as counsel for Ammar al-Baluchi observed, “there are huge known unknowns.” Given the government’s repeated and acknowledged efforts to rely on secret evidence and simultaneously hide that same evidence from the accused — and the public — a wide array of problems for a defendant who seeks to represent himself are easily predictable.

As David Nevin, counsel for defendant Khalid Sheik Mohammad, has explained, secrecy is “the live wire of this case.” At some point, Nevin suggested, the court will have to decide if it wants this trial to be a “real case” or merely a fundamentally unfair exercise of government power. And whether it’s a “real case” depends in part on whether the government succeeds in hiding from the American public the details of some of the most important trials in our history.

Perhaps the moment that most perfectly encapsulated the week of hearings so far happened at the end of the second day. Defense counsel had submitted a motion containing information that the government had decided was so secret that special permission was required to read it. But the government had not cleared the judge himself to know the information. After consulting with the court security officer, the judge refused to accept the defense’s submission.

“It’s hard for me to know what it is without knowing what it is,” he said. The same could be said for the military commission itself.