A Misguided Ruling in the WikiLeaks Case: 23 Hours a Day Alone in a Cell is Always Solitary Confinement 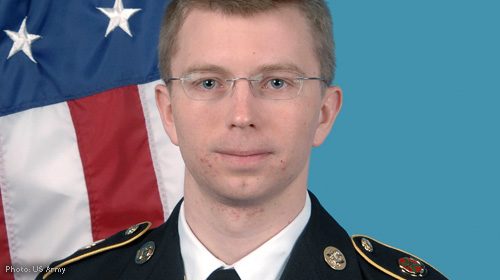 For nine months, Pfc. Bradley Manning was held in a windowless cell in Quantico, Virginia, for 23 hours a day, at times with no clothing, while awaiting trial for allegedly leaking U.S. military and diplomatic documents to WikiLeaks.

This is the definition of solitary confinement.

And yet, yesterday, while a military court ruled that the punishment Manning endured was “excessive,” the judge insisted that he was not subject to solitary confinement because he had some limited contact with other human beings.

Manning’s defenders argued the military judge should have dismissed all of the charges against him because of the harsh treatment and solitary confinement the former Army intelligence analyst was subjected to at the hands of his Marine jailors.

While the judge did agree that Manning’s treatment was unduly harsh and could not be justified as a legitimate government interest, she did not dismiss all the charges, but instead held that any sentence he may receive if convicted will be reduced by 112 days.

Regardless of your stance on Manning’s charges, one thing is very clear: the judge was simply wrong when she found that he was not subjected to solitary confinement. Unfortunately, her opinion displayed an all too common misunderstanding of what solitary confinement is and the damaging effects it imposes on human beings.

No prisoner is ever held in total isolation; there’s always incidental contact with prison staff who deliver meals and perform other essential tasks. In this country, solitary confinement has always gone by many names, whether it occurs in a so-called “supermax prison” or in a separate unit within a regular prison called disciplinary segregation, administrative segregation, control units, security housing units (SHU), special management units (SMU), or simply “the hole”. But by any reasonable definition, being locked alone in a cell for 22 or 23 hours a day is solitary confinement.

Indeed, researchers in this country have routinely defined solitary confinement as the practice of placing a person alone in a cell for 22-24 hours a day with little human contact or interaction. The U.N. Special Rapporteur on Torture has also adopted this definition in a groundbreaking global study on solitary confinement, presented to the United Nations General Assembly, which called on all countries to ban the practice, except in very exceptional circumstances, as a last resort, and for as short a time as possible.

Not only is does segregation in a cell by yourself for 22-24 hours a day fall squarely within the definition of “solitary confinement,” the practice is well recognized as painful and difficult to endure. “It’s an awful thing, solitary,” U.S. Senator John McCain wrote of his time in isolation as a prisoner of war in Vietnam. “It crushes your spirit and weakens your resistance more effectively than any other form of mistreatment.” Senator McCain’s experience is reflected in the general consensus among researchers that solitary confinement is psychologically harmful. In fact, the harms are so well known that the top psychiatric doctors in this country, the American Psychiatric Association, recently issued a formal position statement that prisoners with serious mental illness should almost never subject to such treatment and in the rare event that isolation is necessary, they must be given extra clinical supports.

Our military’s failure to understand the grave harms and risks inherent in its solitary confinement practices needs to be addressed immediately and in keeping with national and international standards. Observing human rights at home and abroad — in peace and at war — is a fundamental American value. The men and women who serve in our military deserve nothing less.