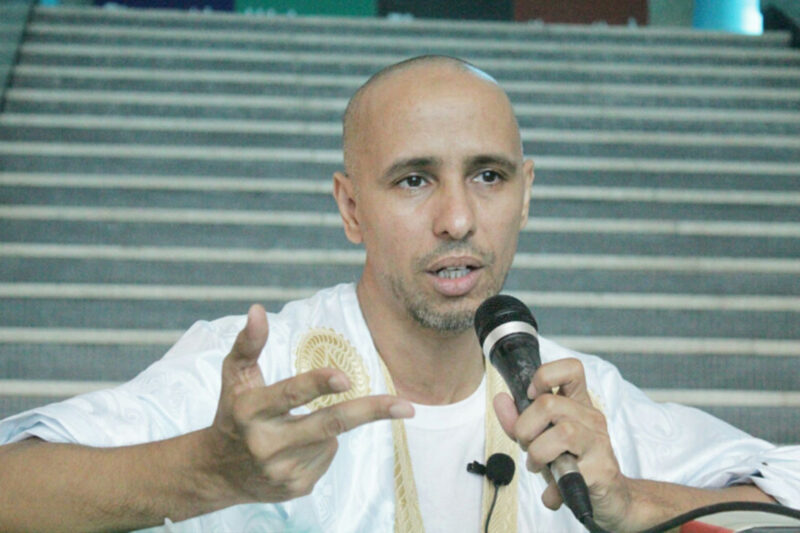 Mohamedou Ould Slahi was released one year ago from the prison at Guantánamo Bay, after 14 years without charge or trial. This week, the best-selling memoir he wrote from prison was rereleased — with the U.S. government’s redactions restored.

If I wanted to, I could put my pen down right now, close my office door behind me, and go for a long walk outside.

Today in Nouakchott, Mauritania, it is terribly hot and dry, so that would not be the wisest choice, but freedom is having that option. And freedom is choosing to write instead, not because my life depends on it, but because these days, thank God, it finally doesn’t.

A year ago this week, a U.S. military cargo plane touched down on this city’s arid runway and I was escorted, unshackled, down the airplane’s ramp and toward a group of government officials. With each step I pulled farther ahead of my American guards, farther away from the territory of bondage, and toward the territory of freedom.

Hours later, a car turned onto the street of the house where I grew up and I was swarmed by family members and supporters. And then I was standing inside the house, just a few feet away from where I sat one day when I was 11, listening to the radio as they announced names of children from around the country who had made it into high school.

Getting into high school was a big deal back then: There were few slots, and many who passed all their classes still did not make the cut. Those who managed had their names printed in the military dictatorship’s official newspaper and read over the air for the whole country to hear. My family did not even know I had taken the admissions test, because most students took it when they were 13, but I couldn’t wait. Standing in that room for the first time in 15 years, I flashed back to that moment, hearing the radio announcer mispronounce my last name and seeing the shocked look on my sister’s face.

But I don’t think my family was all that surprised. As a child, I always wanted to teach and write, and after school I would gather the neighborhood kids whose parents could not send them to school and re-create the lessons I’d received that day, using walls as my blackboard. I also had a minor compulsion for writing: I wrote things down anywhere and everywhere, and more than once I was embarrassed when friends found my intimate ideas scribbled in the margins of my schoolbooks. 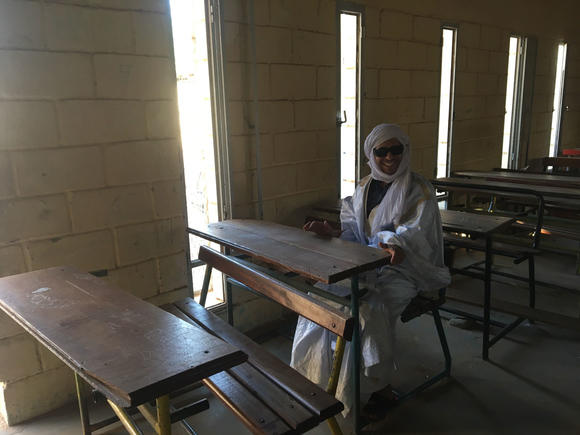 Mohamedou Slahi at the desk where he used to sit in high school.

That afternoon, back in my home, I held a copy of “Guantánamo Diary” for the first time. My lawyers had shown me photographs of the book on the shelves of bookstores in several cities and languages, and they were able to bring me a photocopy of my text, with all of the government’s redactions. But while I was in Guantánamo, I could not see the book itself.

Censorship is a familiar thing in Mauritania. I remember my mother telling my older brothers not to discuss politics, for fear the walls would hear. In my country, we’re used to having things kept hidden in the name of national security. What still shocks my family and friends was that the censorship in Guantánamo Diary wasn’t just in the Arabic edition. It came directly from the American original, which meant the information was being kept from the American people.

When I wrote the manuscript that became Guantánamo Diary in 2005, I had all but disappeared. I was in an isolation hut, the same one I had been dragged into two years before during my months-long torture. For four years, the U.S. government had shut me up and done the talking for both of us. It told the public false stories connecting me to terrorist plots, and it kept the public from hearing anything from me about my life and how I had been treated.

Writing became a way of fighting the U.S. government’s narrative. I wanted to bring my case directly to the people. I wasn’t sure if the pages I was writing and giving to my lawyers would ever become a book. But I believed in books, and in the people who read them; I always had, since I held my first book as a child. I thought of what it would mean if someone outside that prison was holding a book I had written.

Now, incredibly, I was holding that book myself — though in a censored, broken form. And I was meeting many people who had read it. The first thing many of them asked me was when they would be able to read the book in an uncensored version. So in the months after my release, I worked with my editor Larry Siems on what we came to call a “restored edition” of “Guantánamo Diary,” because it often felt like we were trying to restore an old building.

I worked in a copy of the book, making notes above the redactions and in the margins, and then I would take a break, go home, eat lunch, and remember even more. I found myself writing and remembering, and writing some more, and then Larry and I did what we were denied the opportunity to do the first time “Guantánamo Diary” was published: We worked together to edit these censored sections. The result was published in the U.S. last week. As with the original, uncensored, and handwritten manuscript, this is as close as I can come to the truth as I experienced it and understand it, in the best form I can express it.

Here, for example, is a passage from the new book that the U.S. government for some reason thought necessary to redact in the original. It describes a scene from a polygraph test I was forced to take while at Guantánamo:

“I noticed an ant walking up the wall, and then many more leading and following her. I learned to follow ants in the Mauritanian secret prison, watching them until they left the cell and me behind. I watched this one climb, going about her daily business and not realizing the drama that was unfolding before her very eyes.”

Here is a page with redactions and restored text in gray: 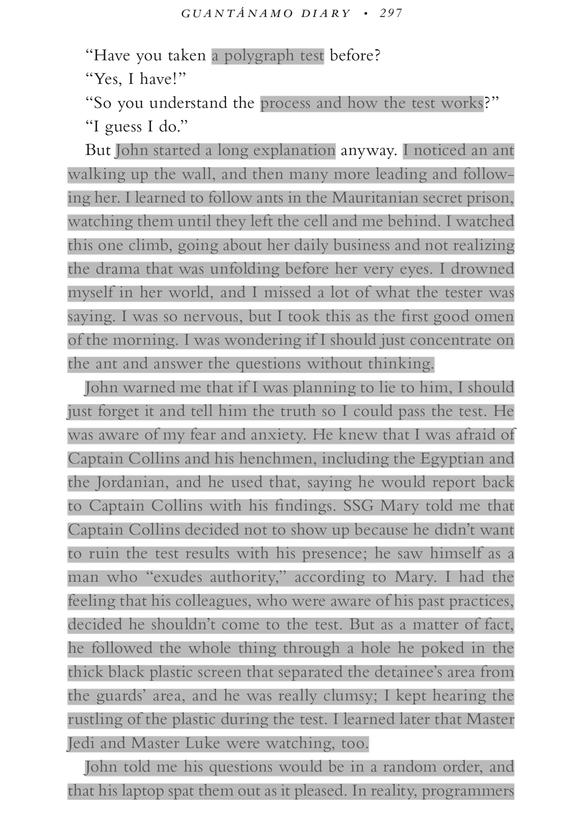 Restoring this broken text has been about seeing things that someone wanted hidden. Sometimes that someone was me. When I received the photocopy of my book in Guantánamo I stayed up all night reading it, afraid I had written something I would regret. And yes, there were things that embarrassed me. I was especially ashamed of my habit, when I was young, of making up sarcastic nicknames for people I met. The Jordanian intelligence agent who oversaw my rendition operation was not “Satan,” as I named him in the original manuscript; he is a human being, with a full life and a family. That kind of name-calling is someone I was, not someone I am now.

In that sense, reading what I wrote 12 years ago really is like reading an old diary. Sometimes I’d laugh, and sometimes I got very upset. But mostly I just smiled at my own silliness and learned more about who I was, and who I am.

Who am I now, thanks to my lawyers, my family and friends, my publishers, and my readers, is a free man: a free man who can make the choice to stay inside on a hot, hot day and write about the enormous, beautiful world outside my door.