Some Thoughts on DMV Image Databases and the Police 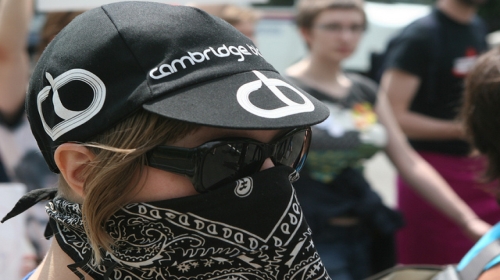 The Washington Post has an excellent, in-depth article today on the growing use of driver’s license photo databases combined with face recognition analytics by police.

There are two ways to think about this. First, it is yet another long stride toward a surveillance society:

On the other hand, are we prepared to say that the police, once they identified the images of the Boston Marathon bombing suspects, could not run them against DMV databases to see if they could identify the suspects? (They did, and it was no help, the Post reports, but that’s more a reflection of the technology’s limits than an answer to the policy question.)

We have always focused our criticisms of face recognition technology on proposed mass surveillance uses. We have never criticized the technology’s use, for example, in helping the police match a suspect photo against a book of mug shots of previous convicts. Typically in such cases, the software’s operator will set a desired tolerance level, and the program will collect all the faces that come within that range of similarity, and then a human will inspect them to look for matches. I don’t see any problems with this use of the technology.

When you expand that technique beyond mug shot books to DMV image databases of the entire population, however, it moves us into much more uneasy territory. Not only are such uses violations of the privacy principle that information collected for one purpose should not be repurposed without a subject’s permission, but they also subject each citizen to the possibility that he or she will fall under the microscope of the police due to some misidentification.

Perhaps those objections can be overcome in certain serious situations. But this much is clear: neither the police nor others should have access to DMV image databases without good reason and systematic checks and balances to enforce that policy. If there is a strong criminal predicate, that is one thing, but we mustn’t allow these databases to become fuel for petty status and identity checks—and certainly not used to enable mass suspicionless surveillance and tracking.