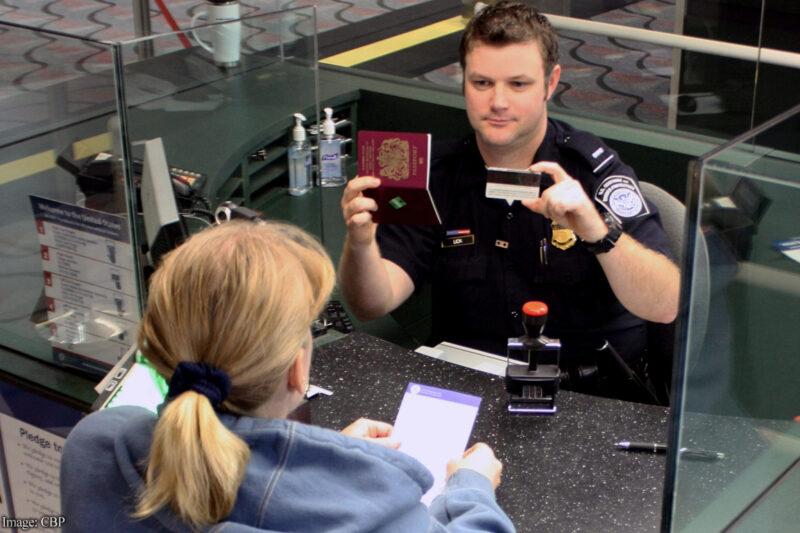 What we know about this program comes from a privacy impact statement DHS issued on the program, and a briefing CBP Deputy Executive Assistant Commissioner John Wagner gave to privacy advocates in Washington this week. CBP’s plan is to install cameras at boarding gates to take photos of, and apply face recognition to, all cross-border passengers at the boarding gate to their aircraft. Currently being operated in six airports around the country (Boston Logan, New York JFK, Dulles in D.C., Hartsfield-Jackson in Atlanta, Chicago O’Hare, and Bush in Houston), the TVS program is part of a larger program called “Biometric Entry/Exit.” That program is DHS’s attempt to comply with a congressional requirement that the agency use biometrics to keep track of visitors entering and exiting the United States, in order to identify individuals who overstay their visas.

The way the system works is that before departure, CBP obtains the passenger manifest for each flight, and then reaches through the government’s extensive, interconnected set of databases to assemble photographs on each passenger. Those include passport and visa photos as well as photos “captured by CBP during the entry inspection” and “from other DHS encounters.” The agency then compares face recognition templates (essentially, patterns) derived from those database photos to templates derived from live photographs taken by a camera at the boarding gate.

There are a number of very serious problems with this program from a privacy standpoint:

Given all of these serious social implications, one of the biggest problems with the program is that it hasn’t been authorized by Congress. Considering the significance of applying face recognition to the entire American cross-border traveling population, we should expect CBP to subject the program to the full democratic process. To the contrary, as Harrison Rudolph from the Georgetown Center on Privacy & Technology put it, “Congress has passed Biometric Exit bills at least nine times. In each, it has been clear: This is a program meant for foreign nationals. In fact, when President Trump issued an executive order in January on Biometric Exit, it was actually reissued to clarify that it didn’t apply to American citizens.” Unfortunately, based on the briefing provided to advocates, CBP seems to believe that even a nationwide rollout of their pilot wouldn’t require separate Congressional authorization. But this program is clearly not what Congress contemplated, and should be subject to a vigorous public debate that allows members of Congress to weigh the privacy impact and other costs of the new proposal against its purported benefits.

It should be noted that the narrow data-privacy impact of this system is different than some other face recognition deployments. When the technology is deployed, say, on the street, it may collect several kinds of information that its operator does not already possess: (1) photographs of subjects’ faces; (2) their identity, if those photographs can be matched to others; and (3) the time and place where they were seen. In the case of this program focused on international travelers, however, CBP already has all of that information. They have access to the passenger manifests and already know exactly who is departing the country on each flight. And, they already have access to a photograph of each traveler. CBP does run each traveler against an opaque computerized risk assessment engine called the Automated Targeting System, which we at the ACLU have been criticizing for years—but it does that irrespective of whether a passenger’s photo is taken at the gate.

That said, as we have seen there are plenty of significant and problematic societal implications of this program. The biggest from a privacy perspective is that it represents a major step—probably the most major yet—in placing the United States on the road toward widespread use of face recognition as a technology for tracking and control, and for very little gain. Congress and CBP should end it.