Why Don’t We Have More Privacy When We Use A Credit Card? 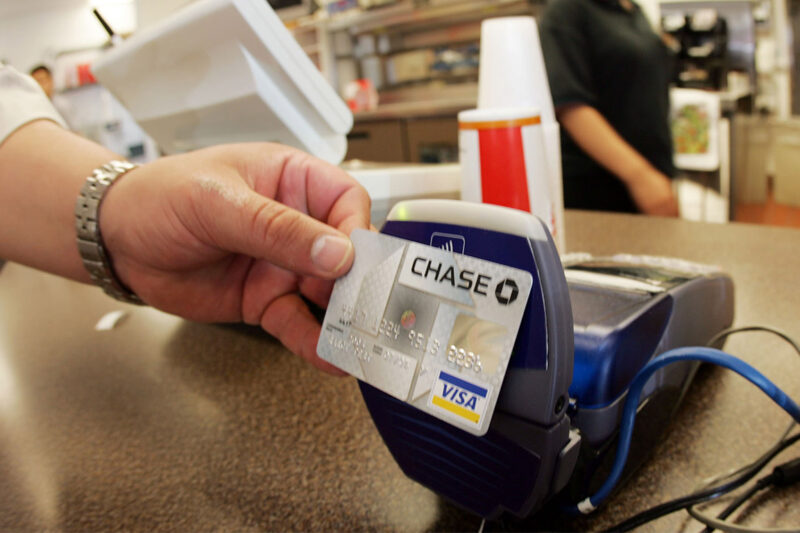 Yesterday, we published a piece on cashless stores and how they are bad for low-income communities, undocumented people, and many merchants — and for privacy. In this post, we take a closer look at the privacy problems with electronic payment systems such as credit cards.

Simply put, cash is good for keeping people from prying into our lives, and credit cards are not. That starts with the stores and restaurants where we use them. When we use a credit card to buy something, the seller can learn our first and last name, which, combined with a zip code (either requested at the register or guessed at, since most transactions take place near where people live), can be used to learn a lot more about us. Using “data appending” services, the merchant may then be able to acquire our email and postal addresses and our telephone number. That, in turn, permits a merchant to tap into the databases of the giant data broker industry and learn anything from demographic information to our employment, marital, and homeownership status to our interests and hobbies and even our medical conditions. A retailer may also add our personal data, including purchases, into a “data cooperative” where it will become available to all the other participating companies as well.

It is true that there are other ways for merchants to track people and their purchases, including those made with cash — from loyalty programs to Bluetooth tracking to face recognition. It is also theoretically possible that cash could be tracked using serial number readers, but we know of no existing infrastructure for doing that. Cash is not a guarantee of privacy, but it is still far more privacy-protective than credit cards.

A big reason that electronic payment systems threaten privacy is that they introduce a middleman. When a middleman becomes part of the process, that company often gets to learn about the transaction — and under our weak privacy laws has a lot of leeway to use that information as it sees fit.

The primary middlemen in most non-cash transactions today are the oligopolistic credit card companies (Visa has around 60% of the credit and debit card market, MasterCard has 25%, American Express 13%, and Discover 2%). Mobile apps such as Apple Pay, Venmo, and Square are also gaining a foothold.

But, regardless of who plays that role, Congress has bent to the will of the financial industry and refused to enact adequate privacy protections. In 1999, Congress passed the Gramm-Leach-Bliley Act (GLB). Although it has often been described as a “financial privacy law,” Gramm-Leach created nothing more than a weak “fig leaf” privacy standard. The real effect of the law, which manages to be both extremely complex and weak, has been to ratify the abandonment of customer privacy by an industry (banking) that, once upon a time, prided itself on discretion:

In 2002, citizens in states around the country began to rebel against this rule by passing their own, tougher “opt-in” financial privacy rules requiring people’s affirmative permission before their information could be shared. In North Dakota, for example, the battle over a proposed ballot measure to require opt in for the sharing of financial data was a true David and Goliath story. On one side were wealthy and powerful financial interests including big, national banks and insurance companies, which ran a sophisticated media campaign opposing the measure, and outspent the pro-privacy forces by a factor of at least 6-to-1. On the other side was a group of citizen-volunteers led by Charlene Nelson, a homemaker and mother of three working out of her home. Until a last-minute $25,000 contribution by the ACLU for radio ads, the grassroots effort had reported donations of just $2,450.

Yet despite this lopsided battle, the ballot measure won with over 70 percent of the vote.

Unfortunately, in the face of this rebellion by North Dakota, and another in California, as well as similar “opt-in” laws in some other states, financial interests ran to Congress and were able to use their sway to thwart states’ ability to pass stronger standards than GLB. In many crucial areas, GLB was made the ceiling rather than the floor for privacy protection. (A similar preemption battle is shaping up today over consumer internet privacy legislation.)

The result is that we now have a situation in which consumers’ credit card and other financial information is bought, sold, traded, and accumulated by the private sector at an ever-faster pace — and made all the more convenient and available for access by the government.

The current ecosystem of privacy invasion needs to stop, and is one more reminder why Congress needs to enact strong, comprehensive privacy legislation — and why we need to preserve cash as a widely-available option for making purchases in our society.